EUROCONTROL Think Paper #18 - One size fits all - A common unit rate for Europe? 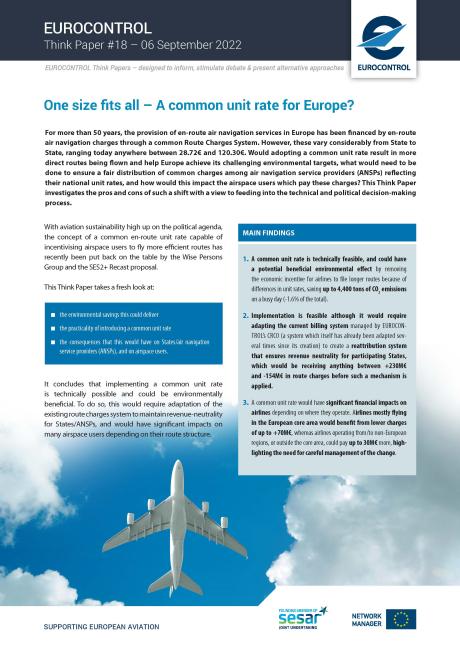 Currently, the cost of en-route air navigation service provision varies considerably across States. Our 18th Think Paper analyses whether having a common en-route unit rate would incentivise airspace users to fly more efficient routes, calculates the environmental savings this could deliver, assesses the practicality of adapting the current Route Charges system, and outlines the consequences that this would have on States/air navigation service providers (ANSPs) and on airspace users

We find that removing the economic incentive for airlines to file longer routes because of differences in unit rates could have a potential beneficial environmental effect of up to 4,400 fewer tons of CO2 emissions on a busy day, around -1.6% of the total.

We also show how moving to a common unit rate would be technically feasible. The current billing system managed by EUROCON¬TROL’s Central Route Charges Office would need to be adapted, as it has several times before, to apply the new common rate, as well as to introduce a reattribution mechanism to guarantee revenue neutrality for participating States (who otherwise would be receiving anything between 230M€ more and 154M€ less, where their national unit rate and the new common unit rate differ.

Finally, we quantify the financial impacts on airspace users. We find that airlines mostly flying in the European core area would benefit from lower charges of up to 70M€, whereas airlines operating from/to non-European regions, or outside the core area, could face a higher route charges bill of up to 30M€ more, high¬lighting the need for careful management of the change.

“Europe’s challenging commitment to achieve net zero emissions has put the idea of establishing a common unit rate firmly back on the table; this highly topical analysis confirms that it would be both technically feasible, and desirable in terms of bringing environmental gains. Additionally, no longer incentivising airlines to fly longer routes where this would save on unit rates will help EUROCONTROL as the Network Manager to improve airspace utilisation, which is set to become a key challenge as traffic fully recovers and finally exceeds pre-pandemic levels in the years ahead.”