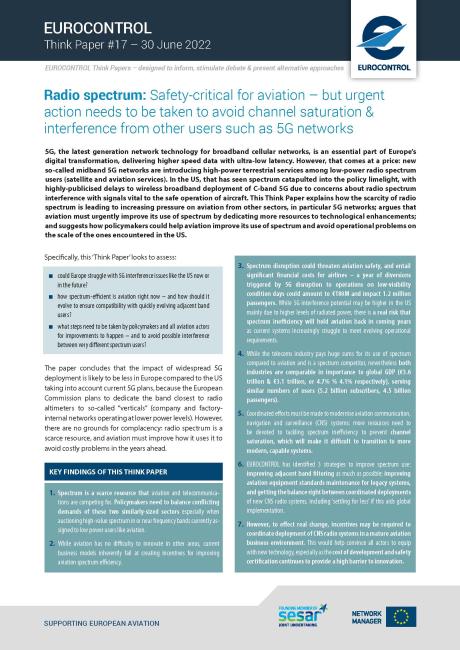 Concerns that high-power terrestrial 5G networks could interfere with signals vital to the safe operation of aircraft have catapulted radio spectrum into the policy limelight, with highly-publicised delays to wireless broadband deployment of C‑band 5G in the US.

Our latest Think Paper, the 17th in a series of thought-provoking studies, assesses how spectrum-efficient aviation is right now, and asks whether Europe could struggle with 5G interference issues like the US now or in the future.

We take a look at the challenges facing this increasingly scarce resource that is both safety-critical to aviation, and business-critical to telecoms – two industries that play a huge role in powering the global economy. We emphasise that policymakers need to balance the conflicting demands of these two similarly-sized sectors, each contributing +4% to global GDP and used by 4-5 billion people each year, especially when auctioning high-value spectrum in or near frequency bands currently assigned to low-power users like aviation.

We find that while the impact of widespread 5G deployment is likely to be less in Europe compared to the US based on current 5G plans, there are no grounds for complacency. Radio spectrum is a highly sought-after, scarce resource with rival spectrum users posing a growing risk of interference. Aviation must act now to improve how it uses its precious spectrum to avoid costly problems in the years ahead – yet current aviation business models inherently fail at creating incentives for doing this. We argue for urgent coordinated efforts to modernise aviation communication, navigation and surveillance (CNS) systems and prevent the channel saturation that will make it difficult to transition to more modern, capable systems.

And in the medium term, we suggest ways in which policymakers could help aviation improve its use of spectrum and avoid operational problems on the scale of the ones encountered in the US.

“Spectrum disruption matters: signal interference from high-power users like 5G networks could threaten aviation safety, and entail significant financial costs for airlines. A year of diversions triggered by 5G disruption to operations on low-visibility condition days could cost airlines and airports as much as €180M and disrupt the travel plans of up to 1.2 million passengers – big numbers for an industry still struggling with the impacts of COVID-19, and facing new economic challenges triggered by the invasion of Ukraine. Clearly, aviation needs to devote more resources to tackling spectrum inefficiency – if we do nothing, there’s a real risk that aviation could be held back in coming years, as today’s systems will increasingly struggle to meet evolving operational requirements.”

Published on
30 June 2022
This covers
Communications, navigation and surveillance
Share this