What could ANSPs achieve over the next decade? 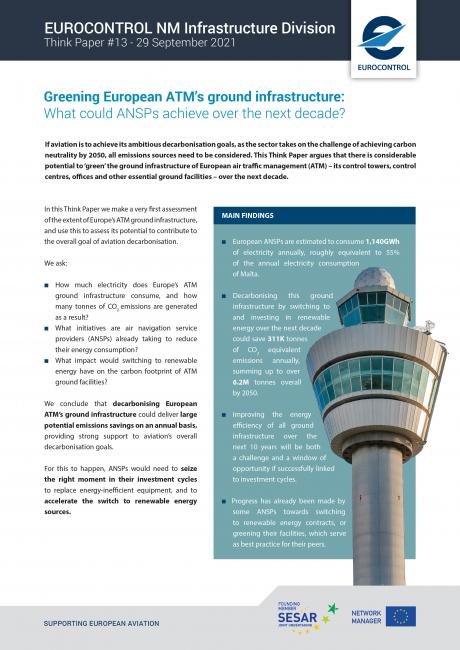 There is considerable potential to ‘green’ the ground infrastructure of European air traffic management over the next decade, our latest EUROCONTROL Think Paper reveals, in a first-ever attempt to quantify the extent of this infrastructure, and to estimate its total predicted energy consumption, and the resulting CO2 equivalent (CO2e) emissions.

Our 13th in a series of thought-provoking Think Papers reveals that European ATM’s air navigation services infrastructure is extensive, including well over 6,000 communications, navigation and surveillance ground-based facilities across Europe, as well as over 400 control towers, over 60 area control centres, and various offices.

Our research suggests that if air navigation service providers could make the switch to renewable energy, and seize the right moment over the next decade in their investment cycles to replace energy-inefficient equipment, over 311K tonnes CO2e could be saved on an annual basis, summing up to a sizeable 6.2+ million tonnes by 2050.

Progressively decarbonising European ATM’s ground infrastructure is, we argue, both realistic and achievable, and could deliver large potential emissions savings on an annual basis in support of aviation’s overall decarbonisation goals.

Think Papers are produced to stimulate debate and look at alternatives. They do not represent the official view of the Agency or its Member States.