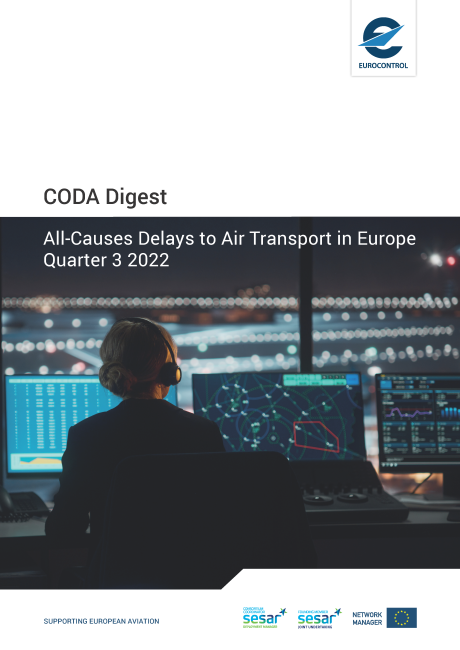 The Q3 2022 issue of our all-causes delay and cancellations to air transport in Europe (CODA Digest), part of the EUROCONTROL Network Manager’s reporting on network performance, is now out.

Arrival punctuality for the quarter also sharply deteriorated, with only 64.5% of flights arriving within 15 minutes or earlier than their scheduled arrival time (STA).

Analysis into the causes of delay shows reactionary delay contributed the most to the average delay per flight at 11.0 minutes, with airline causes ranking second with 6.1 minutes per flight.

There were significantly more ATFM capacity issues in the network in Q3 2022. Karlsruhe UAC saw delays from a combination of ATC capacity, weather and increased complexity due to military traffic. The Ukrainian crisis generated ATFM delays throughout the quarter as traffic flows continued to shift following the closure of the Ukrainian FIR.

There were also new ATM system deployments in Reims and Praha ACCs. Frequent convective weather also impacted the south east axis, notably in August. All these factors together resulted in en-route ATFM delay sharply increasing to 3.0 minutes per flight.

Airport delays also increased, as many of the major European hub airports struggled with labour shortages and adjusting their operations to accommodate the increasing numbers of passengers during the peak summer months.

Read the full report available for download below for more details.