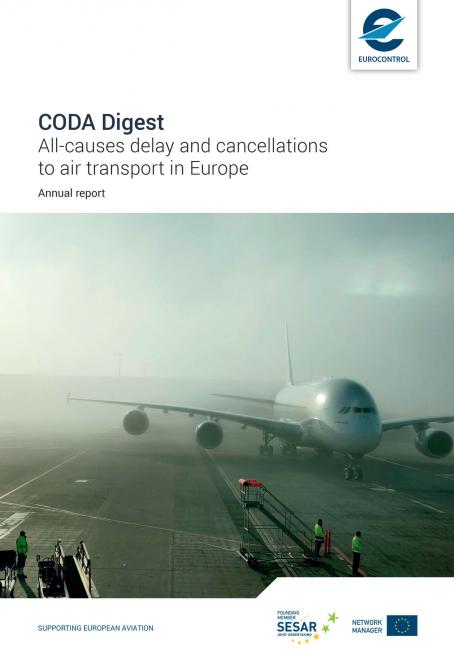 The annual issue of our all-causes delay and cancellations to air transport in Europe for 2019, part of the EUROCONTROL Network Manager’s reporting on network performance, is now out.

In 2019 delays improved when compared to 2018, this compared to the severe levels both passengers and the airline industry suffered in 2018. Despite this improvement, in the context of long-term performance the level of delay was the third worst in the last 10 years, behind 2010 and 2018, with en-route ATFM delays during the summer season remaining a problem for airlines.

Following the record high delays of 2018, airlines made considerable efforts and investments such as scheduling improvements by increasing buffers and using hot spare aircraft to improve on-time performance, in-turn improving the passenger experience in reducing reactionary delay. The benefits of these efforts can be seen in the 2019, with punctuality improving to 77.6% (on arrival), compared to 75.8% in 2018. Driving this improvement were significant reductions in reactionary (knock-on) delays, down 1.0 minutes, contributing 5.7 minutes to the average delay per flight. Primary delays from airline operations remained stable decreasing by 0.1 minutes with a contribution of 3.4 minutes per flight, with this delay cause remaining the main cause of primary delay.

ATFM en-route delay remained a significant cause of delay to airlines in 2019, this decreasing to 1.6 minutes per flight. Although this cause remained an issue, measures taken by the Network Manager (eNM) and air navigation service providers for the summer helped, resulting in fewer ATC capacity ATC staffing regulations aided also in part by better weather. Operational cancellations decreased to 1.7% (from 2.0% in 2018) with fewer disruptions, notably ATC industrial action penalising airlines during the year.

In summary, combined these factors resulted in an average all-causes departure delay of 13.1 minutes, down by 1.6 minutes per flight on the record bad situation in 2018, where the average delay was 14.7 minutes per flight.

Read the full report for more details and subscribe to receive it directly in your mailbox.