Find out how the EUROCONTROL Network Manager is geared up to meet the challenge on a daily basis.

The European network is heading for a close to full recovery this summer from the pandemic, with traffic expected to reach 90%+ of summer 2019 and up to 33,000 daily flights on peak days. However, while busy summers are always hectic for the network, this year is especially challenging as all actors continue to battle the aftereffects of the COVID-19 pandemic, with staff shortages causing flight cancellations, bottlenecks and delays across Europe. The EUROCONTROL Network Manager (NM) is at the centre of concentrated efforts to minimise the impact of these challenges by supporting and coordinating actions with aircraft operators, airports, air navigation service providers (ANSPs) and other aviation stakeholders.

“2022 is very different to 2019. The level of traffic in major parts of Europe is at or above 2019 levels with much higher volatility. On top of this, we have additional complexities to manage like the reduced availability of airspace due to the war in Ukraine, airports ramping up their operations after COVID, and a major system implementation in France. The EUROCONTROL Network Manager’s efforts are fully dedicated to supporting and closely cooperating with aviation stakeholders during the busy summer weeks to reduce delays and the environmental impact of traffic.”

To help us manage the network efficiently, EUROCONTROL has a number of key support tools for operational staff.

The EUROCONTROL NM’s Weekly Rolling Network Operations Plan is a key planning tool for all aviation actors. Updated on a weekly basis, it provides a consolidated and detailed European network view of the evolution of the air traffic and helps ANSPs and airports plan their services to match expected traffic demand from the airlines in a safe, efficient and coordinated manner. NM assesses information from ANSPs and airports concerning the service delivery for 1,700 ATC sectors and 500+ airports, and proactively reaches out to both where we see that the available capacity might not meet the envisaged demand, proposing and implementing mitigation solutions that aim to reduce the impact of ATC delays on air traffic as much as possible. The Rolling Plan also factors in major public or political events, significant military exercises and activities, or technical or operational changes impacting en-route or airport operations, enabling NM to put in place additional coordination measures to meet their specific operational objectives while minimising their impact on overall network operations. 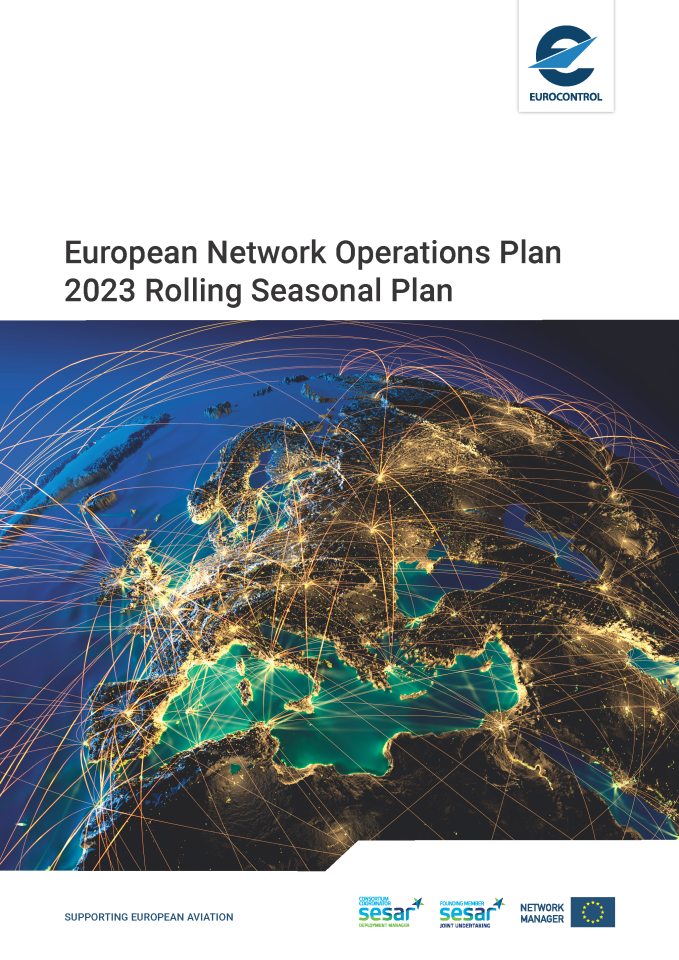 To ensure everyone is aligned and aware of the network’s operational challenges, NM organises a weekly teleconference with the NDOP (Network Directors of Operations), which is also attended by ANSPs, airlines, airports, military and the European Commission. The enlarged NDOP teleconferences assess the last week’s operational situation and evaluate the areas to be addressed for the next 6 weeks. This includes the expected development of air traffic, the operational situation for a number of air traffic control centres, en-route sectors or airports for which further measures are proposed. In addition, this also includes European airport slot situation, demand/capacity imbalances, flight and passenger demand prediction, expected events with potential impact for en-route and airport operations, expected weather outlook, and so on.

We discuss on a daily basis with a large number of operational stakeholders to agree the detailed implementation actions proposed in the Rolling NOP and discussed during the enlarged NDOP teleconference. EUROCONTROL’s Network Manager Operations Centre (NMOC), in close cooperation with the NM ATFM Strategic Team, the RAD Team and the Airports Team, manages afterwards the operations in the network and enables the implementation of their part of the agreed actions.

NM staff carefully examine the information, raise awareness with other stakeholders that may be affected, and assist with advice on the strategic, pre-tactical and tactical planning of air traffic flows. July, for example, is already seeing NM shift some traffic from airspace with particular capacity issues to less congested areas, thus better balancing capacity and demand. EUROCONTROL coordinates these collaborative decision-making processes, which rely to a great extent on our unique data and tools. And we are always focused on tackling delays early or anticipating them in close collaboration with aviation stakeholders to find out as soon as possible what the constraints are, and to anticipate any capacity problems. Delays may start out as a local matter, but can quickly trigger a ripple effect throughout the network if not carefully managed.

All of our planning and coordination actors feed directly into our 24/7 operations service, the EUROCONTROL NMOC in Brussels. Working closely with fellow EUROCONTROL experts and in direct contact with operational counterparts across the network through B2B, B2C or via the telephone, the NMOC combines the expertise, knowledge and experience of operational network management to balance the available capacity in the network against the demand over a planned timeframe of D-6 to D-1, with a complete pre-tactical plan all the way through to D0. After the day of operations (D0), the critical part of our continuous improvement process starts on D+1, where ops experts take the feedback from the tactical (and preparations) day, share the learning points with new team members coming on shift, and feed back into the network for learning and even better support the next time similar situations arise.

The NMOC has dedicated positions for contact with airlines and airports, and these play a critical role in supporting other operational colleagues as they work each day to keep the network as stable and predictable as possible – including tackling fresh unexpected challenges of bad convective weather (thunderstorms) reducing sector capacities, loss of runways (normally due to unplanned maintenance), industrial action, lack of capacity not notified in advance, and many other issues besides. The NMOC also has a dedicated military cell which monitors specific military demand for airspace (a role that in the context of the war with Ukraine has only grown in importance), plans safe areas in which they can operate, and then releases the airspace as quickly as possible once the exercises have finished so it can be used once again to deliver additional, much-needed capacity for civil aviation.

All of the 30K+ flight plans filed every day across the network pass through the NMOC, dealing with re-routings to avoid delays and issues with incorrect planning, or restricted routes for example. In addition, and a critical element to the network, operational colleagues populate the roadmaps of the sky (airspace data) with all the information necessary to allow a structure to exist that coherently assembles all airspace from EUROCONTROL’s 41 Member States and 2 Comprehensive Agreement States as well as associated, adjoining and in some cases worldwide data.

Predicting the impact of likely regulations at large airports in Europe: EUROCONTROL NM trials the use of AI

Modernising France’s air traffic management together: the implementation of the new 4-FLIGHT system