Giving users the freedom to plan a route in Europe's airspace.

Free route airspace (FRA) is a specified volume of airspace in which users may freely plan a route between a defined entry and exit point. Subject to airspace availability, routeing is possible via intermediate waypoints, without reference to the air traffic service (ATS) route network. Inside this airspace, flights remain subject to air traffic control.

FRA is a way of overcoming the aviation sector's efficiency, capacity and environmental problems by helping reduce fuel consumption and emissions, while improving flight efficiency. At the same time, it paves the way for further enhanced airspace design and ATM operational concepts.

With free route airspace projects now in place across three quarters of European airspace, the region’s flight efficiency targets are within grasp. European flights reached a record low in terms of en-route flight extension at the end of 2017. Route extension - the difference between the flight flown and the corresponding portion of the great circle distance - reached an average 3.17% in 2012. In 2017, this fell to 2.77%, very close to the Europe-wide performance target of 2.6% by 2019, thanks in part to initiatives like free route airspace.

FRA is a key landmark in achieving free routeing across European airspace on the road to SESAR's business trajectories and 4D profiles. It will make it possible to meet the demands of future airspace users over the next 50 years, including civil and military unmanned aircraft systems (UASs), hypersonic transport, spaceplane operations to sub-orbit, wireless network balloons and airships.

Once fully implemented at European level, these improvements should allow the following savings, compared to the today’s situation:

Operating a FRA environment offers improved traffic predictability thanks to more stable trajectories. At the same time, it enhances the use of conflict detection tools. This concept can lead to a better spread of conflicts compared to the concentration of conflicts generated by the current fixed route network.

Our studies also show a slight decrease in the workload of controllers as a result of free route airspace, in addition to a decrease in radio transmissions, as well as evaluation and coordination tasks.

All air traffic controllers (ATCOs) working with free route airspace are adamant they do not want to go back to a fixed-route network. Previously, aircraft were receiving direct routes, but there was no logical correlation between the fixed-route network and how the aircraft were actually flying. Free route airspace offers ATCOs the flexibility to handle the traffic tactically with the correct flight plans.

In our capacity as Network Manager (NM), we are currently responsible for the implementation of an advanced concept of operations and free route operations, while providing the pan-European view of FRA deployment.

We ensure and coordinate the gradual implementation of FRA, in a harmonised way, throughout European airspace.

As Network Manager, we provide support to ANSPs in the form of airspace design, concept of operations, advice on aeronautical publication and the pre-validation of each new FRA environment to ensure that airspace users are able to plan flights in line with the concept.

Our dedicated teams deliver appropriate solutions to further enhance operational performance and resolve any potential problems, which may arise as a result following the implementation of the FRA. We offer proactive coordination and technical and operational support for local or sub-regional free route airspace initiatives, ensuring that the requisite network improvements are in place to support those initiatives. Contact us to learn more.

Our FRA concept of operation provides a framework for the harmonised and safe implementation of free route operations in Europe when a State, Functional Airspace Block, or ANSP decides to implement it.

We develop, adopt and update common specifications and guidance material for our stakeholders. 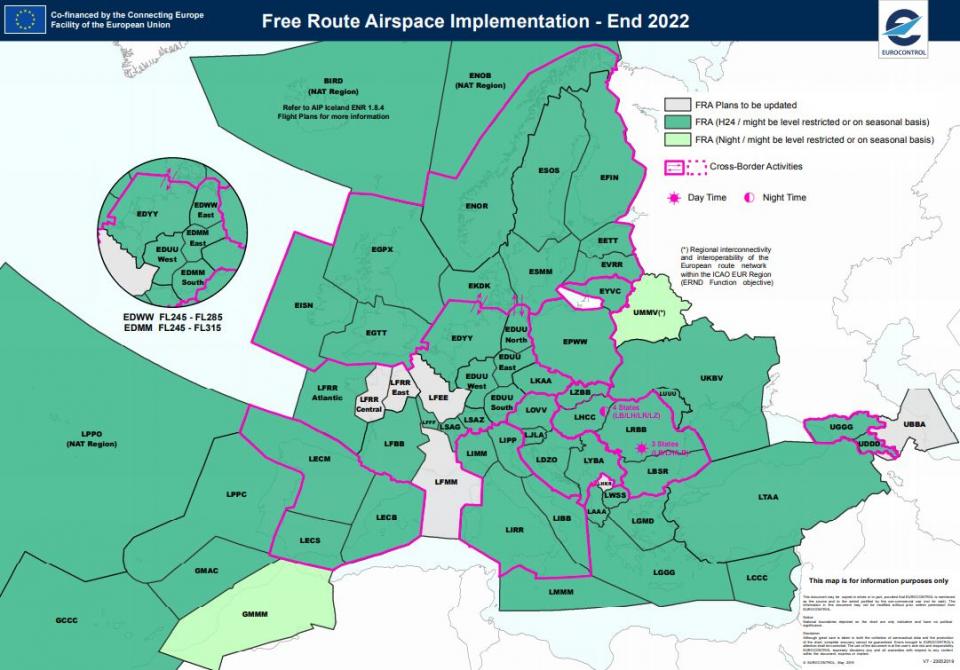 FRA has been successfully implemented in much of northern, south-east and central south-east Europe, as well as in Portugal - the first country to introduce full free route airspace in 2009.

We expect that most of Europe's airspace will have implemented FRA by the end of 2022 (see Commission Regulation (EU) 716/2014 for Europe-wide implementation).

Implementation at our Maastricht UAC

Europe is the first region in the world to have implemented a full FRA concept, although flight efficiency initiatives do exist in various forms in other parts of the world, such as North America and Australia.

FRA was introduced by EUROCONTROL in 2008. Further development of the concept was made possible by the approval of Commission Regulation (EU) No 677/2011 laying down detailed rules for the implementation of air traffic management (ATM) network functions and amending Regulation (EU) No 691/2010.

This project has been co-financed by the Connecting Europe Facility of the European Union.