Continuous descent operations offer the potential for major environmental and fuel-burn improvements – but implementation needs to be more coordinated and widespread throughout Europe.

There is an initiative underway to optimise the operational environmental and fuel-burn benefits of continuous climb operations (CCO) and continuous descent operations (CDO) in Europe. While CDO is a natural pilot technique, a relatively modest portion of the potential benefits – in fuel burn, noise and emissions reduction – are being realised. The task force set up under the aegis of EUROCONTROL in 2015 to agree on harmonised definitions of CDOs, metrics and parameters for measurement across the continent is addressing this by developing a high-level European CCO/ CDO Action Plan to provide a renewed impetus to the programme. The Plan will outline the task force’s view on what actions will be needed to make further gains in performance improvements, especially from CDO, and will give more detail on current barriers to further implementation and what can be done to overcome them. The Plan will, therefore, help every stakeholder to understand better the complexity of optimising CCO/CDO, highlighting potential best-practice solutions in European airspace.

“There have been many initiatives to increase the number of CCOs and CDOs at European airports, but just because an airport has published a CDO arrival procedure doesn’t mean it is ever used or has enabled a performance improvement.”

“Using harmonised parameters allows us to identify a large set of environmental improvements that could be achieved/retrieved from optimising CCO/CDO. We are now working on improving performance, and that means getting the airlines and the air navigation service providers (ANSPs) to come together and collaborate.”

The task force is developing a tool kit which consists of the European CCO/CDO Action Plan; Monthly CCO/CDO performance tables for all airports / airlines in Europe, and a set of resources to support CCO/CDO implementation and optimisation to be available on the task force’s web pages.

These resources will contain guidance material for implementation – for example support on CCO/CDO implementation, sharing best practices in airspace and procedure design that allow optimised CCO/CDO, support and guidelines for training on aircraft energy- and flight performance management, International Civil Aviation Organization (ICAO) documentation on CCO/CDO and impact assessment guidelines for ATM changes – with advice on setting up cross-stakeholder meetings where CCO/CDO implementation can be discussed, as well as and support in stakeholder consultation.

Collaboration should involve airports, airlines, ANSPs, pilots, controllers and airspace designers developing a common approach to understanding and implementing CDOs and CCOs. It will be a complex task. Airlines will be the major beneficiaries, but their current focus on ATM issues is concentrated on the big issue of delay reduction and airspace capacity enhancement rather than operational refinements that can reduce fuel burn and thus emissions. Airports will also benefit – CDOs and CCOs can lower the noise footprint of descending and ascending aircraft – but their role in enabling the operation is peripheral. ANSPs and controllers will have to do much of the heavy lifting in implementing and enhancing the optimisation of CCO/CDO.

Never miss out on the latest developments from EUROCONTROL

One of the first challenges will be to measure performance and define a harmonised definition of a CDO in a meaningful, standardised way across all stakeholders’ groups within acommon set of parameters. Without this, CDO operations are not yet delivering the benefits they could.

“If you measure performance you improve performance,” says Brain. “We want to do it for all European airports and all airlines flying in Europe, subject to data availability, on a monthly basis with the best performing airports and airlines identified. But there are other aspects of performance as well. Some airlines have really good practices and we think these should be followed throughout the industry. However, CDO measurements at some airports are focused only on the last part of the descent operation. A CDO at London/Heathrow, for example, is pretty much standardised to optimise the noise footprint of arriving aircraft from 6,000 feet down to 2,500 feet, when the aircraft intercepts the ILS glideslope. But if you have a descent profile starting from top of descent (e.g. flight level 360) and you are focusing just on the last 3,000 feet or so down to glide slope interception, that is just one-tenth of the whole vertical profile. There are also big fuel savings to be counted if we optimise from top of descent, and this is really where I think it should be focused.”

The main challenge is to overcome the silo approach to adopting more environmentally responsible operations. Aircraft manufacturers do not have specific references to CDOs in their aircraft operating manuals. ANSPs do not always train their controllers to understand the impact of air traffic control (ATC) instructions on pilots and pilots do not always understand why controllers give them the instructions they do.

“Predictability is an important element here,” says Brain. “It sounds like an easy word, but it means different things to pilots and controllers. When pilots say they want predictability, they want to know what’s going to happen to them en-route from the current location to the airport; they don’t know if they are going to be vectored 100 miles out the way or receive instructions to level-off during descent. They need to be told as soon as they are on frequency what’s going to happen and with appropriate information provided so they can plan an optimum descent profile. But from the point of view of controllers, predictability means they want to know what a pilot is likely to do if he or she has been given an instruction. For example, if the controller says “descend flight level 100”, some pilots may do it immediately, others may do it after 10 or 15 seconds, others may use a lower or higher rate of descent. The controllers need to know that all pilots will do the same thing.”

“We are promoting the work of Collaborative Environmental Management groups, where all operational stakeholders come together at an airport to identify how they can work together to promote environmental benefits, and CDO is one of them,” says Brain. “But more than that, we have seen that projects, for Innovation example in Germany, have been successful because the individual pilots and controllers working on a specific procedure have come together. So, it’s a more generic collaboration initially, followed by a more focused approach by the actual operational actors working in collaboration with each other.”

CDO operations in complex airspace offer a particular challenge, especially when CDOs start in the airspace of one State and finish at an airport in another. The European CCO/ CDO Action Plan will highlight some of the factors that might affect optimised CCO/CDO performance and they include the way airspace is designed and allocated in neighbouring States and air traffic control centres. Cross-border operations are already framed by Letters of Agreement (LoAs) – and cross-border CDOs will require a new, more flexible approach for these agreements.

“If you have a descending aircraft between two different sectors, the agreed transfer of control level between the two sectors may be flight level 320,” says Brain.

The flight level 320 will have been agreed based on the average flight profile of aircraft that cross this boundary, or it might be designed to keep the aircraft out of a neighbouring sector that has capacity issues. 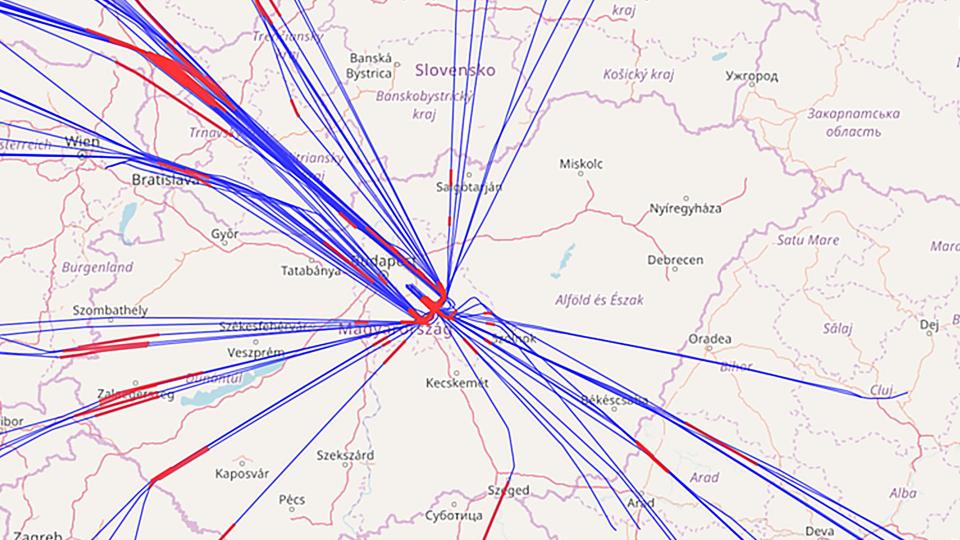 "But because of this procedure, it usually ends up that the aircraft remains in level flight at flight level 320 for a couple of minutes, burning much more fuel at nonoptimal levels.”

This illustration shows an example where the red lines indicate all level flight for arrivals to LHBP (Budapest).

“This is something we are addressing within the Route Network Development Sub-Group in EUROCONTROL, a group which comprises the airspace designers of each country. Any change to procedures will involve complex negotiations laid out in the LoA between ATC centres, but we are looking at route network design to see if these can accommodate any such changes to optimise CDOs. It will be very time-consuming and effort-intensive but studies have shown that there are benefits to be gained, even in the core of Europe. We just think a bit more flexibility will be required.”

Learn more about the new era for aviation powered by AI and our role in it.

In 2018, EUROCONTROL conducted a European Civil Aviation Conference (ECAC)-wide CCO and CDO analysis using 2017 traffic data, to estimate the potential network benefits of optimising the CCO and CDO in terms of fuel savings, emissions reduction and fuel costs. The study estimated that optimised CCO/CDO operations could provide fuel savings of up to 350,000 tonnes per year for airlines, equivalent to approximately €150 million in fuel savings; annual CO2 savings would be greater than one million tonnes. The study also demonstrated that across Europe the potential fuel-saving benefits from CDO are in the region of 10 times greater than those from CCO. Therefore, while at certain airports the potential of individual benefits from optimising CCO may still be greater than those from CDO, at the European level the primary focus of vertical flight efficiency improvements for climb and descent profiles should concentrate on optimising the arrival profile, and from top of descent wherever possible.

For urgent press inquiries related to the Agency and its work, please fill out the form, or call:

For any urgent press matters relating to the EUROCONTROL Maastricht Upper Area Control Centre, please fill out the form, or call: